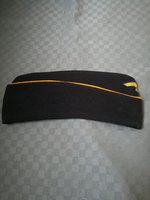 Please note the information about COVID-19 on the Starting Page

Here you find rare collectibles of the German Kriegsmarine

On this side of our shop you will find collectibles as uniforms, medals or equipment an personal belongings of members of the german Kriegsmarine.

U-Boat items are also listed in a special category.

The Kriegsmarine emerged from the reichsmarine and was founded on June 1, 1935. With the fleet agreement of June 18, 1935, the Navy was granted a higher tonnage than under the Versailles Treaty. The Navy was used for the first time in the Spanish Civil War.

The battleship Schleswig-Holstein opened the Second World War with the bombardement on the Westerplatte near Danzig. In April 1940 the Kriegsmarine was instrumental in Operation Weseruebung, the occupation of Denmark and Norway. There have been no major successes for the surface units. Only the U-Boats were able to significantly disrupt the trade routes for a while.

From the beginning of 1945 until after the war, the Navy was involved in the evacuation of civilian refugees from East Prussia. The High Command was dissolved on July 21, 1945. Parts remained active as a German mine clearance service until December 31, 1947.